Philippa Davies gave a poised performance of a diverse and exciting program for flute alongside pianist, Sally Birkett.

The recital began with Cantabile and Presto by Romanian composer, Enesco. Philippa gave a moving performance using sweet singing colours in the Cantabile and vibrant, sparkling articulation in the Presto.

Philippa presented five movements of Aspects of a Landscape for Solo Flute by Paul Reade. The piece was written especially for Philippa and she encapsulated the audience in the evocative movements of Dawn, Birdsong, Sundown, Lament and Celebration.

The fitting combination of flute and cello, then added further variety to the recital with Jet Whistle for cello & flute by Villa-Lobos. The dance-like Brazillian character of the piece was captured by Philippa through her crisp articulation and soaring melodic lines. Sebastian Conberti played an atmospheric ostinato on his cello and warm responses to the flute line.

Sebastian Comberti then gave a sweeping performance of the Bach Prelude from Cello Suite no. 1 with a very warm and stylistic tone. In a delightful surprise, the Bach Prelude seemlessley became the backdrop to a floating flute melody which resonated from the back of the chapel. The melody of the ‘Swan’ from the Carnival of the Animals, by Saint-Saëns normally played by a cello, was played on the flute, in a clever homage to both pieces, as arranged by Sebastian Comberti. Audible sighs came from the audience as Philippa slowly walked down the aisle with her flute from the back of the chapel and onto the stage in a mesmerising performance.

Philippa then played a movement from another flute solo work written especially for her, called
Beyond the Stars by Jan Willem Nelleke. Philippa created a hypnotic 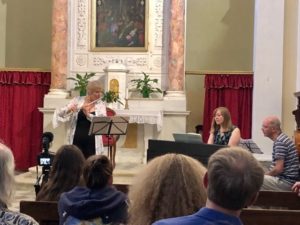 and tight groove with a tapping of her foot and trill-key multiphonics in the final movement, ‘Funky Quasar.’

In an exciting performance of the Flute Sonata by Taktakishvilli, Philippa evoked the changing characters through her tone colours and sparkling articulation. Sally Birkett brought out the intentionally quirky harmonies and rhythmical writing throughout the work.

Philippa chose Morceau de Concours by Gabriel Fauré as her encore which floated through the chapel in a reflective close to the recital.