Flutes in Tuscany 2019
Thursday 18th July
Lunch time concert: Baroque music
Kate Hunt – attending for the 2nd time
The chapel once again was the setting for another concert & resonated with music from the Baroque period.
Liz Walker, looking very elegant, played on a Renaissance flute that was made
40 years ago by Filadelfio Puglisi from Florence. This was made more special as Puglisi came especially to Tereglio to hear the flute being played at the concert. ‘Dont vient cela’ by Claudin de Semisy was followed by a piece composed by Anna Bon di Venezia and both sounded beautiful played on Liz’s wooden flute, made from boxwood.
Boismortier‘s Sonata in E minor by followed, played by our Swedish flute player, Sandra Halvarsson. She was accompanied by basso continuo with Sebastian Comberti playing cello and Julian Walker on harpsichord.
The Baroque programme continued with the G.F. Handel’s Andante in G minor played by Michael Chalmers. This marked his first solo performance on the flute, his usual pastime being the baritone saxophone!
The next performance was an exquisite performance of C.P.E Bach’s Hamburg sonata given by Amelie Donovan with continuo.
A trio sonata in G by J.S. Bach followed and Amelie was joined by Nuala Imrie. These young players captured the mood of the piece well accompanied by continuo.
The final piece was an arrangement of an JS Bach’s Organ Trio Sonata BWV 529 by Liz Walker. Sarah Murphy joined Liz in this very wonderful performance.
After the concert we had the opportunity to hear Filadelfio Puglisi talking about making Baroque flutes in the 20th century. It was a great chance to ask questions and appreciate this skill. 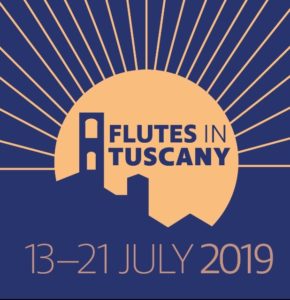