THE ‘SCONOSCIUTA’ (PERFORMED AND SKETCHED IN THE CANONICA) Torsten, one of the adult participants in this Flutes in Tuscany course, shared with us some of the results of the research he has carried out over the past few years. His initiative had the aim of widening the scope of the flute player’s repertoire by presentingRead more about TORSTEN KREBS INTRODUCES US TO ‘NEW’ MUSIC[…]

UM:How did you become involved in Flutes in Tuscany?
SB: Liz is the mother of one of my dad’s cello pupils and we have known each other for 12 years. I cheekily offered my services to Liz as an accompanist when she posted a comment on Facebook about her local flute course hopefully being in Italy the following year!
UM: How familiar were you with flute rep before coming on the course?
SB: Not at all, really! I had accompanied flautists a handful of times at Trinity as a last minute favour to fellow students but had not really worked on repertoire with any players.
UM: Wow! How did you cope the first year? END_OF_DOCUMENT_TOKEN_TO_BE_REPLACED

Flutes in Tuscany 2019 Thursday 18th July Lunch time concert: Baroque music Kate Hunt – attending for the 2nd time The chapel once again was the setting for another concert & resonated with music from the Baroque period. Liz Walker, looking very elegant, played on a Renaissance flute that was made 40 years ago byRead more about 2019 Flutes in Tuscany Lunch time Baroque Concert[…]

Thursday 18th July will forever be remembered by me, as the day I finally met Filadelfio Puglisi. I have owned and played a renaissance flute by Puglisi since my teacher Nancy Hadden introduced me to his flutes back in the late 80’s. As a somewhat lazy and spoilt pupil, I bought and played this fluteRead more about Filadelfio Puglisi[…] 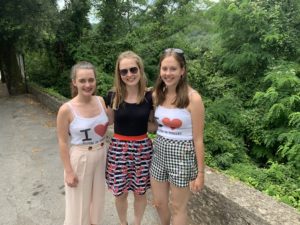 What a way to wake up on a Sunday morning, to a sunny Tereglio and the start of Flutes in Tuscany! END_OF_DOCUMENT_TOKEN_TO_BE_REPLACED

Hooray! The start of Flutes in Tuscany is almost upon us with everyone arriving tomorrow! We are so excited to get under way with lessons, masterclasses and ensembles, and we are really looking forward to meeting everyone and hearing everyone play. The first group of the Tuscany team arrived yesterday afternoon, and enjoyed a lovelyRead more about Flutes, food and flies![…]

Looking forward to Flutes in Tuscany 2019, led by the wonderful, Liz Walker! Look at these temperatures…!